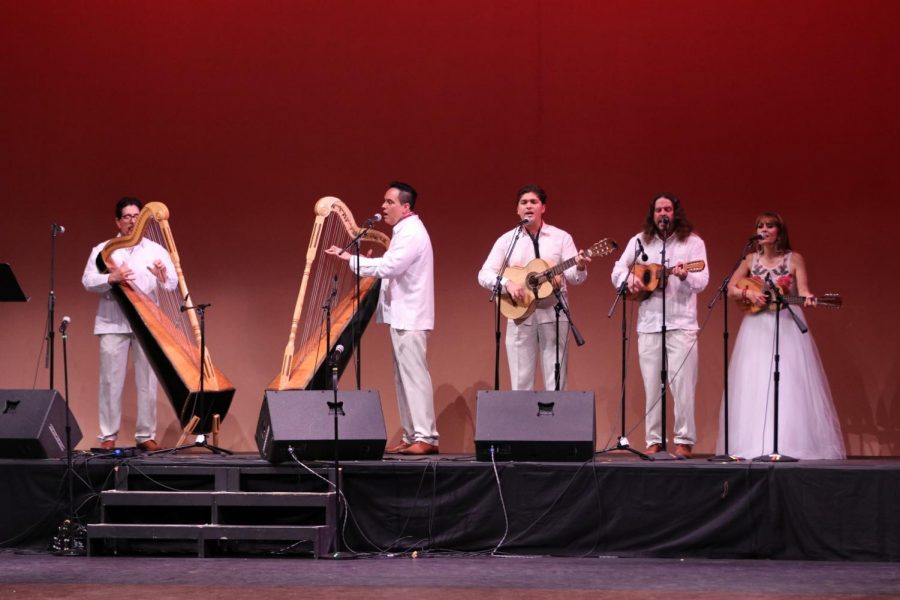 A composer, musician, and professor.

Growing up he was surrounded by educators and the sound of music. His father not only has been a Chicano studies professor at the California State University of Northridge, but he also founded a musical group called Conjunto Hueyapan that would later inspire his son.

Xocoyotzin Herrera, professor of Chicano history and ethnics studies, has been playing music since he was eight years old, but later became a performer at the age of 13 for Conjunto Hueyapan.

“Many people in our family have gotten degrees in Chicano studies or related field and being in the music,” Herrera said.

Because of his father, who instilled a love of music in Herrera, it helped him learn to play various Mexican instruments, the main one being the Veracruz harp that comes from Veracruz, Mexico.

“It is a 36 string harp, in this part of Mexico, they play a lot of this instrument,” Herrera said. “I also play a lot of rhythm instruments called the Jarana and the Requinto, and a bit of flute harmonica [and] the six-string guitar as well.”

As the lead vocalist and harp player, Herrera had the opportunity to perform with his family in Noche Mexican 2019 at El Camino College.

“I perform with Conjunto Hueyapan and does accompany Nuestras Raices,” Herrera said. “We provided musical accompaniment for them.”

Other than performing, Herrera is also doing vocals and composes Mexican music for film and television in the Los Angeles area, he said.

“LMS records company specializes in film and television, I am the composer who pretty much does all of their Mexican music,” Herrera said. “A lot of my original compositions and arrangements have been found in many films.”

According to IMDB, films including “Remember Me” and “Machine Gun Preacher” are two of the many films his music was presented on the soundtracks.

As for the writing process, Herrera said writing music can take days, sometimes even weeks.

Though music has been a big part of Herrera’s life, he incorporates Chicano style as a way to educate students about the culture.

“I am Chicano, I am Mexican, of Mexican descent,” he said. “People who are of Mexican descent from the U.S. are called Chicano’s; those people are very proud of their heritage and actively write and engage in cultural practices.”

Daniel Walker, a history professor, has been sharing an office with Herrera for five years.

They have worked together earlier this year in May on a cultural program called ‘A Celebration of Chicano Culture’, Walker said.

“He is been building certain things, I should say [about] our Chicano Appreciation Week in May, where he’s brought top-notch scholars, artists, politicians, historical figures,” Walker said.

Professor Herrera is very fond of his work in ECC. His work helps him not only explore the history of other aspects of culture but also make money, Herrera said.

Herrera has been teaching Chicano and ethnic studies at ECC for seven years and loves the vibe ECC has, he added.

“I come to the school and in our division, everyone is high in spirits and gets along,” Herrera said. “That is a plus for me, then I get to stand in front of the class and talk about the history that most engage me.”

“I think [that] there is a lot of students interested in learning about the Mexican-American, the Chicano culture,” Andrade said. “I understand that his courses are very popular with the students.”

“Herrera’s class is a class I always look forward too,” Buriel said. “I love his class so far and his Chicano background makes me feel like I have a professor who I can relate to and who understands my background.”

Buriel added that Herrera brings humor into lectures which helps students realize he is passionate about what he does.

“I think it’s important to relate to your professor in order to be able to actually enjoy the classroom environment,” Buriel said.

With teaching about the roots of indigenous Chicano’s pasts, Herrera is confident that ECC’s Chicano students will be able to learn a little more about themselves.

“Their ethnic confidence builds, their awareness of identity strengthens,” Herrera said. “This is because of fact, that I am able to relay this information to them.”